Britain is not only about Big Ben and the Tower of London. Now it is also a KORONET LAGER beer limited edition having a true British character.

KORONET is a brand that not only respects and follows the traditional values but also remains a modern and top-class product that moves with the time and is not afraid to defy common rules and conventions. It is free enough to keep its character and do what it believes is right. All these are extremely important for the BRITISH CHARACTER.

Britain and its Commonwealth realms are marking the 70th anniversary of Queen Elizabeth II's ascension to the throne this year. KORONET also decided to mark its 10th anniversary of the brand's existence. Our official 10th anniversary is only in the coming year, however we decided to start celebrating it now. Why not? On the occasion of our anniversary we have developed and produced the limited edition of a well-known lager in a new and on-trend packaging that emphasizes the KORONET's British character.

Dear Sirs and Mesdames, we are pleased to present you KORONET LAGER!

“We have been inspired to create the KORONET LAGER's anniversary label not only by recognized symbols, but also by modern, quite provocative, and punk style. The design developed by us captures the main idea of the product, which is as follows: 'We stay true to our traditional values but we always get our own way and are not afraid to think outside of the box”, they say at Lidskoe Pivo.

The anniversary edition will be available in all packaging formats of KORONET LAGER: can, 1-pint glass bottle, 2- and 3-pint PET. The lager in a new packaging will gradually appear on store shelves. Please welcome! 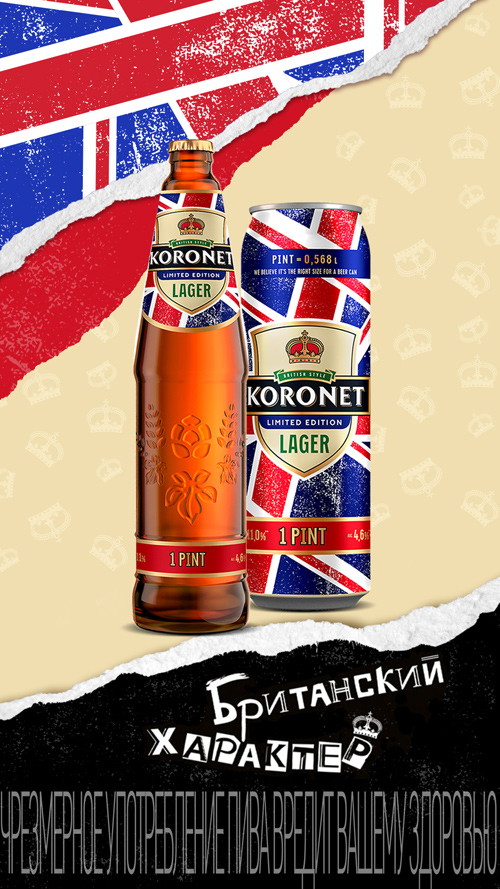