LIDBEER 4.0: One of the leaders of the country’s festival movements closes the open-air season with Leningrad’s performance

LIDBEER 4.0: One of the leaders of the country’s festival movements closes the open-air season with Leningrad’s performance

The festival of hops, malts and water LIDBEER, which has become a favorite of thousands of Belarusians will take place in Lida for the fourth time. The guests will find a great and varied food court, various activations and quests, performances from street artists and promising musicians and a gala concert with some of the best modern bands.

LIDBEER-2018 breaks no traditions; therefore, the main stage will once again host rock bands from Belarus, Russia and Ukraine: ЧуVство Полета, Nizkiz, AnimalДжаz and Воплі Відоплясова. The festival will be headlined by the Leningrad band that will perform at an open-air venue in Belarus for the fist time in several years.

Comfort of the viewers is the top priority

LIDBEER-2017 was remembered by the guests not only for famous musicians, but also for its quality organization. This year, the organizers continue to pay close attention to comfort of the viewers and monitor quality of services.

For example, it is planned to organize distribution of the festival zones in order to improve pedestrian traffic. The increased number of food court points will allow reducing the order waiting time. New recreation areas will be added: everyone will be able to find a comfortable place near the castle walls or on the bank of Lideika river.

The all-inclusive tent city format, which has been a favorite of many fans of festival movement, which includes the possibility to find a place for sleepover as well as rent a tent or a sleeping bag, will remain at the festival.

Festival grounds will start working at 10.00, which will allow the guests not only to participate in all activities, but also to take a closer look at Lida’s sights. The concert program on the main stage starts at 17.30.

LIDBEER is famous for its special atmosphere of drive and fun, friendliness and openness – Lida, the capital of brewing, will turn into a real festival city for one day. The warm atmosphere will also be supported by one of the main innovations of the last year’s open-air: LIDBEER-2018 will continue to speak Belarusian.

The renewed communication format got positive feedback from guests of the event. Lidskoe Pivo, organizer of the festival and one of the largest breweries in Belarus, has been talking to its customers in Belarusian and implementing projects to support the native language and culture for two years. This year’s LIDBEER will please its guests with new activities and entertainment in the Belarusian style.

By the way, Lidskoe Pivo’s brewery will open its doors for the guests of the event once again. On the day of the festival, the guests will be able to register for a free tour around the production facility and learn history of the brewing enterprise that has been working since 1876. The number of groups will be limited.

The interactive format of the festival will be preserved, but with certain changes. Any talented musical act, craftsman or food court representative will be able to apply for participation in the festival via lidbeer.by and become a co-organizer of the big holiday. Nevertheless, in order to vote for a favorite participant, Belarusians will have to undergo full-scale registration at the event’s site. With the help of it, the organizers are planning to avoid fake votes and ensure an even more transparent voting system.

Applications will be accepted from June 18 to July 6. The voting will start on July 9 and end on July 31. The young Belarusian musical act that wins the voting will open the show on the main stage of LIDBEER-2019.

A separate food court and various activities will work at the territory of the gala concert. In the evening, the main event of the open-air festival will begin – a loud concert program including performances by famous rock bands of Belarus, Russia and Ukraine. ЧуVство Полета, Nizkiz, AnimalДжаZ and Воплі Відоплясова will perform on the main stage. The concert will culminate in a performance by Leningrad. Starting price of entrance tickets is 25 BYN. The number of tickets at the special price is limited.

The winner of the poll among Belarusian bands at LIDBEER 2017, ЧуVство Полета, will open the gala concert with the bang. The ambitious pop rock band from Bobruisk is actively conquering its place under the sun of the national alternative scene. The musicians have their debut record “Я знаю, ты со мной” (I Know You’re with Me), 5 music videos, performances at large festivals and song rotations on Belarusian radio stations under their belt.

The energetic rock band from Mogilev celebrates its 10th birthday this year. During this period, the guys have accumulated a lot of songs in Belarusian and Russian languages in their repertoire, many of which can be heard in rotation of the top radio stations. A year ago, Nizkiz presented their third LP “Синоптик” (“Foresaster”), songs from immediately took the first lines of radio hit parades. The song “Небяспечна” (“Dangerous”) was recognized as the Song of the Year according to the Hero of the Year Awards.

There is no blank spot on concerts of these Saint Petersburg-based romantics, and their “animalistic jazz” rocks the audience with a single verse. During its 17-year history, the band managed to perform on the same stages with such stars as Linkin Park, Red Hot Chili Peppers, Garbage and Rasmus.

For LIDBEER guests, the band has prepared not only its famous hits, but also a piece of “Счастье” (“Happiness”) – this is the name of the band’s latest studio effort that was released in 2018.

They are known as founders of Ukrainian rock-n-roll and ethnic rock – they were the first rockers to sing in the Ukrainian language. The band vocally announced its arrival 30 years ago with the debut album “Танці” (“Dances”), and the release of the record “Музіка” (“Music”) made Oleg Skripka’s band immensely popular across the post-Soviet space. At LIDBEER-2018, Воплі Відоплясова will perform the main hits from all the career of the band. Perhaps we will also hear the famous song “Танці” (“Dances”) in Belarusian language.

Sergey Shnurov’s band needs no special introduction: their songs “Ryba”, “Eksponat”, “Manager”, “Bag”, “WWW” are well known to half the population of the Earth.  The band recently celebrated its 20th anniversary and is actively touring with the anniversary program. Belarusians will hear Leningrad’s main hits on September 8 from the main stage of LIDBEER-2018!

Festival entrance is free of charge.

The price of tickets to the gala concert zone – 25 BYN (the number of tickets at the starting price is limited).

You can purchase commission-free tickets at lidbeer.by.

Tickets are also sold by the operator kvitki.by (operator’s commission is collected). 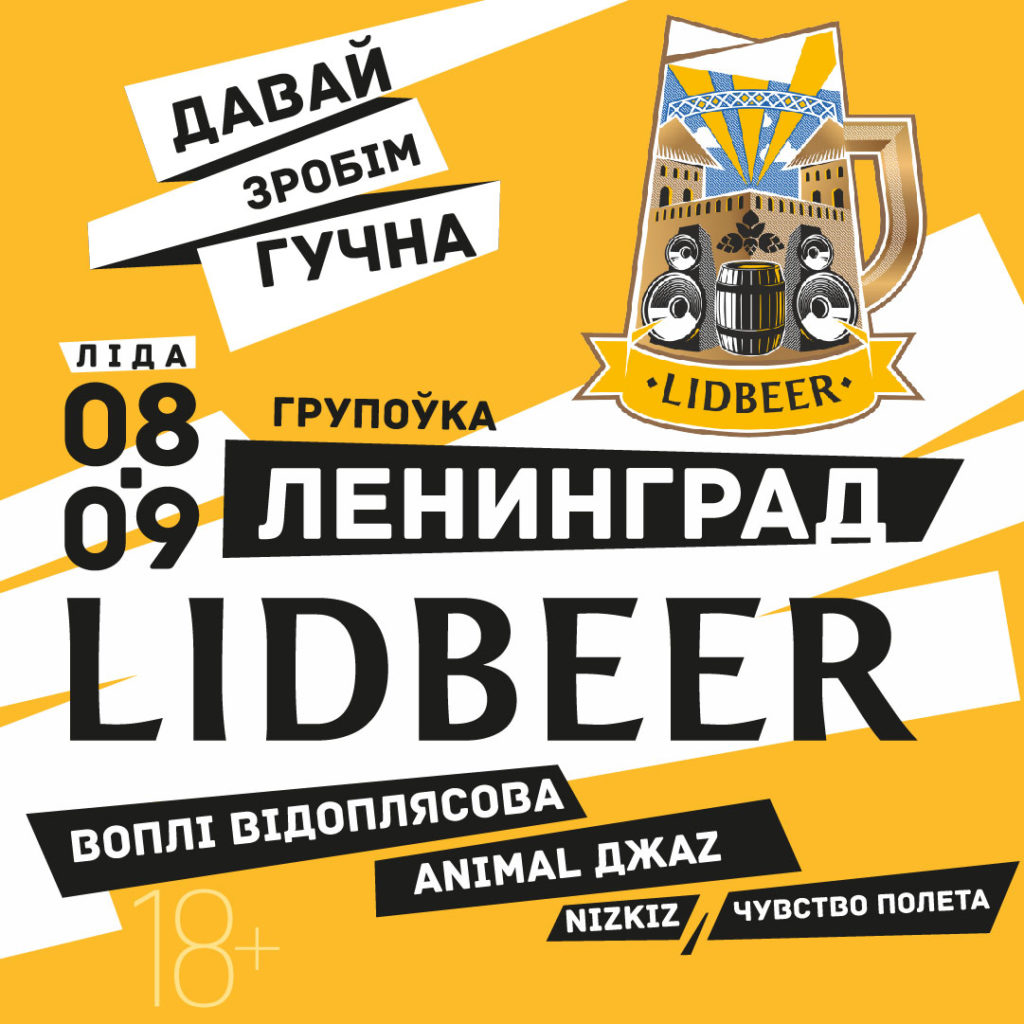