JSC «Lidskoe pivo» presents MENSKAE 1499 — the second sort from MENSKAE limited series dedicated to the 950th anniversary of the capital city. The new product will be dedicated to an important event for Minsk — granting of Magdeburg rights, which gave the city an autonomous power.

Grand Duke of Lithuania and king Aleksandr Yagellonchik gave Mensk citizens a gift muniment on March 14th 1499. Thus, the city became an independent administrative and territorial unit with its own autonomous bodies, arms and tax system and received a status of an industrial, trading and cultural center.

MENSKAE 1499 is a classic pale lager. Beer of bottom fermentation with a pleasant hop aroma and mild flavor.

The label design made as an ancient stained-glass window is based on a miniature picture of a key and muniment as symbols of independence and autonomous power of the city.

The first batch of the new product will go on sale from May 2nd 2017. 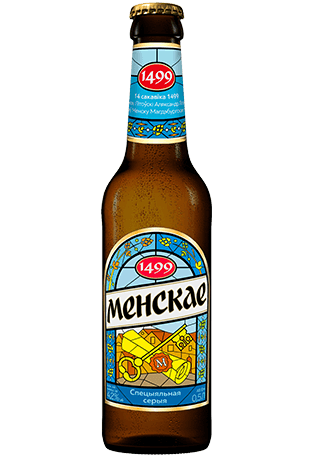