The changes have been made only to the label, the product and bottle have stayed the same. KORONET has become a separate brand, excluded from LIDSKAE line, along with its re-design, and pale KORONET has got a differentiating feature in its name and is now called KORONET Lager.

The color coding of the sorts has been saved mostly unchanged: golden color for KORONET Lager, copper-red for KORONET Red Ale, and deep black with some bright yellow for KORONET Stout. 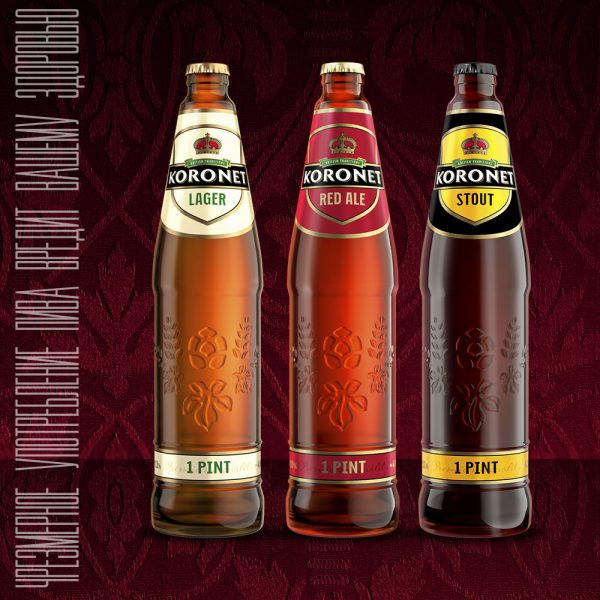 «Being an innovational company, we’re constantly working to improve the quality of our product, including its visual presentation», Audrius Mikshis, General Director of «Lidskoe pivo» company, says. «We are sure that all consumers will like this updated image of KORONET marking a traditional character of the brand».

The first sort of KORONET line was presented at the Belarusian market in 2013. The special features of the brand is its orientation to the British brewery traditions in creating of its sorts, as well as an original glass bottle — a royal pint (0,568 l).

KORONET Stout — dark beer brewed according to the tradition of dry British stouts. It has a deep dark color, malt and caramel flavour, light bitterness in the taste and large cream head.

KORONET Red Ale — top-fermentation beer with a copper-red color and special dry aftertaste typical for British red ales. An important component for brewing KORONET Red Ale is Goldings, an English hop. This specific color is achieved due to using a special malt and slightly roasted barley in brewing.