“If it’s not near beer – don’t steer!”: an unusual social experiment of “Lidskoe pivo”

“If it’s not near beer – don’t steer!” — an unusual social experiment of “Lidskoe pivo” showed how Belarusians react to drivers under the influence

On April 10-13, the company “LidskoePivo” and the brand of non-alcoholic beer “LIDSKAE Nuliovachka” in cooperation with the State Motor Vehicle Inspectorate of the Ministry of Internal Affairs of the Republic of Belarus organized a social project “If it’s not near beer – don’t steer!” After conducting polls at gas stations in Minsk, Vitebsk and Grodno, the organizers of the project found out whatBelarusian citizensthink about drunk drivers. At the same time, a hidden camera shooting with the involvement of a professional actor showed how they really act, if they come across a driver under the influence.

In the course of the questionnaire, which lasted 4 days and included 13 questions on the subject of driving under the influence, 659 people shared their opinion. As it turned out, the most negative attitude to driving while intoxicated is in Vitebsk (98% of respondents), immediately followed by Minsk (96% of respondents). Grodno citizens are less concerned about the topic – 6% of respondents in the region have a neutral attitude towards drink-driving.

At the same time, 3.5% of Vitebsk residents consider it possible to get behind the wheel in a critical situation, while 0.5% admit the possibility in general. Only 1 out of 100 Minsk citizens are ready to break the law and get into the car while intoxicated. The same number of respondents from Grodno consider drink-driving acceptable without a solid reason (3%) or in a critical situation (3%). Additionally, some of the surveyed Belarusians admitted that they got behind the wheel after drinking a glass of alcoholic beer at least once in a lifetime.

Among the reasons for drink-driving, respondents in all regions often referred to the lack of a drinking culture or education, when it comes to consumption of alcoholic beverages. “This proves once again that the work to create a drinking culture and a responsible attitude towards the consumption of alcohol in our country is as relevant as ever,” said AudriusMikshis, CEO of “LidskoePivo”. “Our company has been organizing various events for years now to draw attention to the importance of moderate consumption. We hope that the communication campaign “If it’s not near beer – don’t steer!” has reminded all drivers that they should fully understand the responsibility and consequences of heavy drinking, because drink-driving can threaten not only their safety, but also the life and health of those around them.”

The surveys initiated by “LidskoePivo” in cooperation with the State Motor Vehicle Inspectorate of the Ministry of Internal Affairs of the Republic of Belarus showed that awareness of the extent of the problem of drink-driving varies from region to region. While 55% of the polled residents of Vitebsk and 41% of the residents of Grodno responded unequivocally about the prevalence of drink-driving in the country, in Minsk this view is held by less than a third of respondents.

A social experiment with a hidden camera that followed the poll made it possible to check whether the attitude of the Belarusians towards drivers under the influence corresponds to real actions. According to the scenario, an actor participating in the experiment told random passers-by at one of the petrol stations in Minsk that his car is equipped with a lock with a built-in alcohol detector. Since he hadhad a glass of beer, the detector showed excessive alcohol content. As a consequence, he was unable to start the engine, so he asked the passers-by to blow into the breath tester for him to be able to continue the trip.

In one case, the actor portrayed a man who stands firmly on his feet and does not look drunk. Convincing reasoning has affected more than half of the participants in the experiment. Twenty-sixout of fiftypassers-by agreed to help the driver and blow into the breath tester. Twenty-four out of fiftyrefused to do so.

In the second case, the actor has noticeably worsened his motion coordination. Out of the twenty people who watched him in this state, six people agreed to blow into the breath tester, while fourteen refused.

A teaser video of the social experiment, posted on YouTube video-sharing website, as well as on Facebook, VKontakte and Odnoklassniki has already had about 500 thousand views. You can watch the full video and get acquainted with the results of the experiment here: 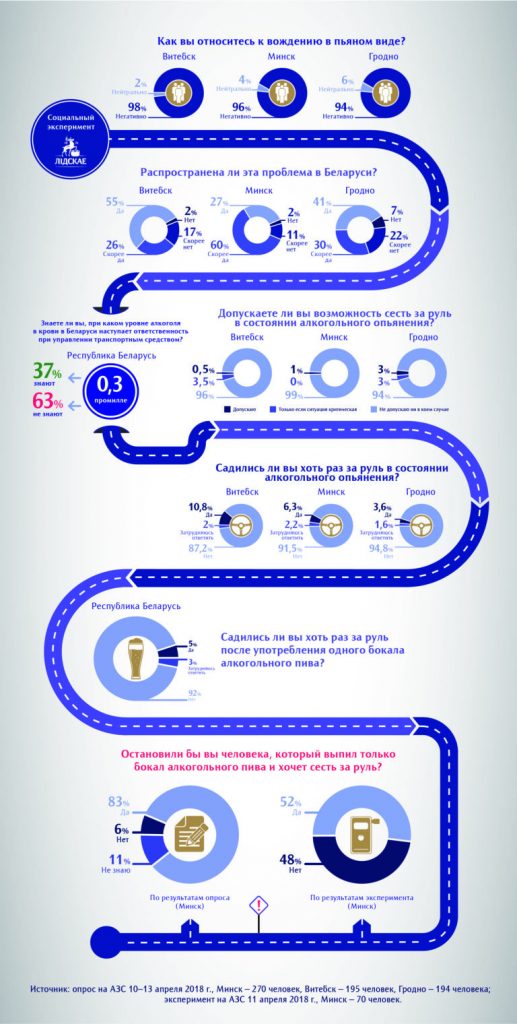